As Sara Ali Khan turned a year older today, Kareena Kapoor wished her with a priceless throwback from the archives. The actress posted a happy memory featuring a toddler Sara kissing her father, Saif Ali Khan. “Happy birthday darling Sara. Unlimited pizza and cake for you today,” Bebo had penned with the picture. 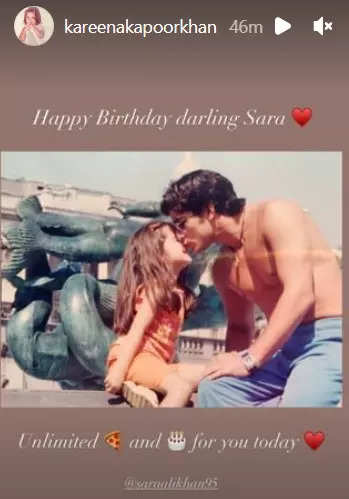 Recently during her appearance on ‘Koffee with Karan’ season 7, Kareena Kapoor Khan had recalled how Sara Ali Khan was hiding from her at ‘Kabhi Kabhie Khushi Gham’ trials. Kareena had told KJo, “I remember at the K3G trials, she (Sara Ali Khan) was hiding behind her mum. And Amrita was actually like ‘Sara really wants a picture because she’s such a big fan. She had loved Poo in KGG and ‘You are my Soniya’ so much’. But I don’t know why people discuss so much about it, because I mean we are family, and like Aamir said if there’s love and regard and understanding. This is what it is. They are Saif’s children, they are his priorities.”

Speaking about Saif’s relationship with Sara and Ibrahim, the actress had added, “Why should it get difficult? Everyone has their time. Saif has had a child every decade, he balances it out beautifully, like he says. And it’s like if sometimes we’re all together, that’s great. Sometimes if he wants to have time alone, like a coffee or get an hour or two alone with Sara, he’ll always tell me. He’ll be like ‘I’m sitting with her. I’m going to be alone, I’m going to chill. I wanna give her that particular time.’ They’ve been on holidays together. I think it’s important for them to bond. They have everything but they have just one father. And it’s so important for Saif also to give each of his children that time. It doesn’t cross my mind the way people discuss it.”